It’s the final countdown (honestly, how awesome is this song?), not for one but for 2 things:

Therefore, today I’m going to post a super-duper delicious dish and next week another one (amazing Greek keftedakia (round fried meatballs) are finally coming!).

And then I’m gonna say goodbye for some time. But I’ll give you a great, envy-inducing update once I’m back! 🙂

Let’s now proceed to this: 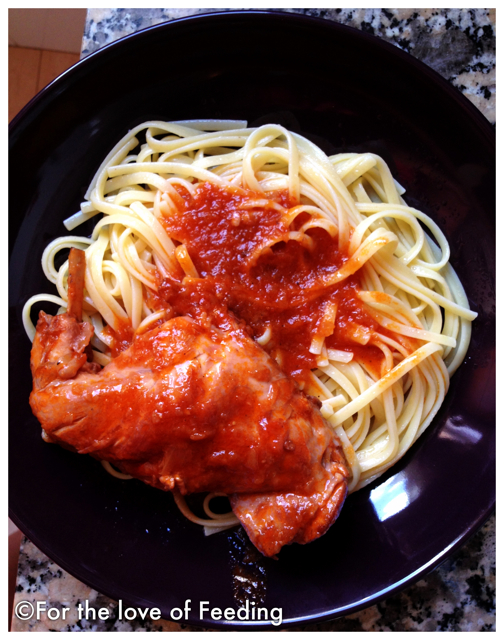 I used whole rabbit, already cut in pieces, and started by frying it just until it gets a golden brown color from both sides.

I removed the meat on a plate and sautéed the chopped onions in a pot with some olive oil. Then added the rabbit in the pot and stirred.

I poured the red wine, swirled the pot and let it boil for a minute or two. I continued by adding the tomato sauce and stirred again.

Next, I dropped in the pot a mix of wonderful spices: cinnamon stick, black pepper balls and bahari (allspice in English).

I filled the pot with water, until it, more or less, covers the rabbit. Seasoned with black pepper, salt, cayenne pepper and a pinch of sugar, gave a final stir and brought to boil. 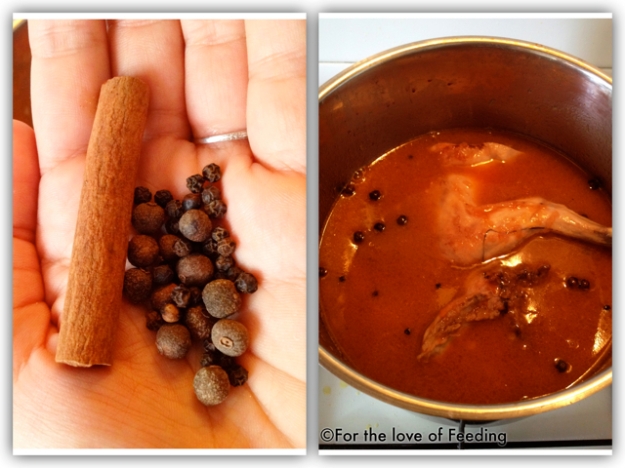 I reduced the heat to medium and let it cook until the sauce thickened and the meat was so soft that it fell from the bones!

You can of course serve this with mashed potatoes or fried potatoes or rice. But this time we chose (we = husband) to accompany it with tallarines.

And it was a great choice.

The sauce was perfect with the pasta!

The rabbit had cooked so thoroughly that you could hardly pick it up from the pot without breaking it. 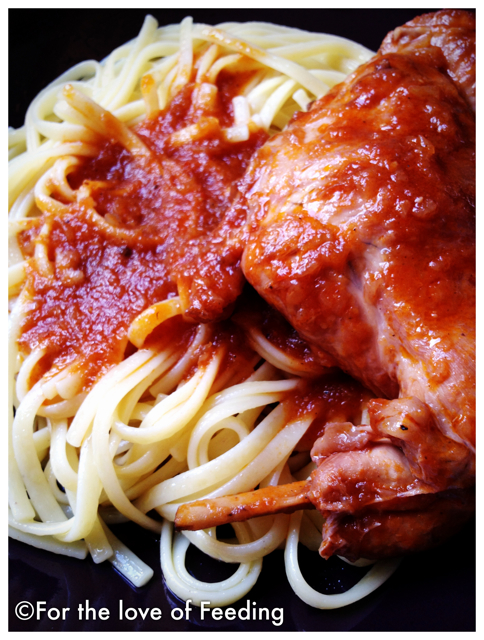 Remember to have bread and cheese (grated or feta) on the table!

Have a nice day!

Pinch of cayenne pepper (or hotter if you want)

Fry the rabbit pieces just until they are golden brown.

Saute the chopped onions in a pot with some olive oil. Then add the rabbit in and stir. Pour the red wine, swirl the pot and let it boil for a minute or two. Add the tomato sauce and stir again.

Add the spices and fill the pot with water until it covers the rabbit. Season with black pepper, salt, cayenne pepper and a pinch of sugar, give a final stir and bring to boil.

Reduce the heat to medium and let it cook until the sauce thickens and the meat is so soft that it falls from the bones!

Serve with pasta or potatoes or rice. And don’t be ashamed to dip that bread in that sauce.. Really.

14 thoughts on “Rabbit in the Pot {Served with Tallarines}”

I'm Villy and I'm very happy you've dropped by my blog! Take a look around, and hopefully you'll like it here! I very much enjoy reading comments, so don't hesitate to leave me one! Or 2. Or 3! Have a nice day!